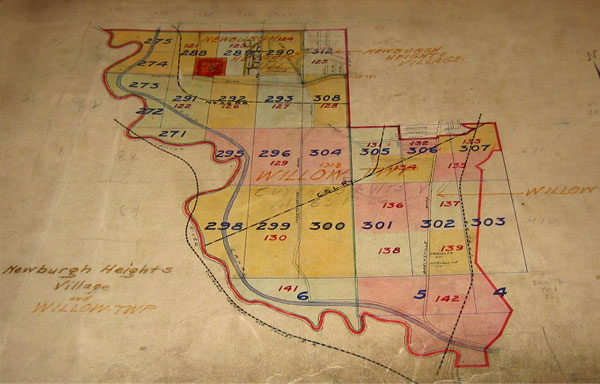 Village of Cuyahoga Heights – Established in 1918

One frequently hears of communities that have seceded from larger municipalities, but not often does it happen that the new seeder takes the city hall along. Nor does it very often happen that the part, which breaks away, contains within itself the richest part of the dismembered territory.

Above all, it does not very often happen in Cuyahoga County, yet here we have Cuyahoga Heights Village, a separate entity after severing political relations with Newburgh Heights in 1918, and still continuing its prosperous reputation with its dozens of manufacturing plants and businesses all located on the southern fringe of Cleveland.

Samuel E. Clapp, who became clerk of the Village in 1918 gave this account of the controversy that marked the secession of the Village from Newburgh Heights to the Cleveland Plain Dealer which printed an article about the Village in its August 2, 1936 edition.

According to Mr. Clapp, the community quarrel was caused by the fact that although the residents of what is now Cuyahoga Heights were paying higher taxes, the money was spent in improving other sections of town, most notably the district near Washington Park.

At that time East 71st Street was only half paved, and East 49th Street had but a narrow pavement. Sewage was faulty, transportation poor. In fact, this section (Cuyahoga Heights) resembled the “slums,” while the lower part of Newburgh Heights looked like a most up-to-date community.

Mayor Anton Linek of Newburgh Heights was confronted time and time again to correct the problems facing the residents of East 71st and East 49th Streets, but the situation did not improve. Finally, led by Jesse W. Hammersley, 25 citizens met one night in a shed and voted to form the township of Willow, which was the first step necessary before a village could be organized. An election was held on February 2, 1918, and 59 persons—a large number for that section—turned out in the bitter cold weather to vote for “secession.” Four trustees were elected, including Clinton Gordon, Mr. Clapp, Joseph F. Schmidt, and R.D. Kerr.

After a few more meetings required by statute, the Village was legally organized and at a final election, March 16, 1918, Mr. Schmidt, a bachelor and son of a pioneer family that had lived on the same homestead for sixty years, was elected to be the first Mayor of Cuyahoga Heights. He remained in office for twelve years.

In addition to establishing the Village of Cuyahoga Heights and choosing its officers, the election gave four out of the five square miles, which comprised Newburgh Heights to Cuyahoga Heights—including the former’s city hall, which was in the seceding area.